One year has passed since my last relevant contribution, Mageia 5 is on its way and Mageia 3 is going to reach its EOL.

Lots of efforts have been putted inside this project and we currently have quite a few modules doing their jobs, against all odds 😛

We introduced a few changes inside the naming conventions: each launch script has been prefixed with the word mana (e.g. manauser, manahost, manaproxy, etc).

It’s what come out from a night session of IRC while we were working on the migration of some drakxtool to adminpanel … Ok it doesn’t sound so nice told this way so… 🙂 lets say that we find out that adminpanel was somehow inflated and we decided to look for something more representative.

mana recalls energy and magic and somehow the names of the authors, Angelo Naselli and Matteo Pasotti.

There are other minor applications able to run inside AdminPanel (embedded or sharing its modules/subroutines):

AdminPanel/MaNa is a beautiful example of object oriented programming using Perl, Moose and Modern::Perl alongside a very readable code style.

Some screenshots demonstrating how those modules are able to run natively as Qt, Gtk and NCurses applications 😉 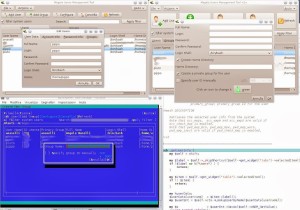 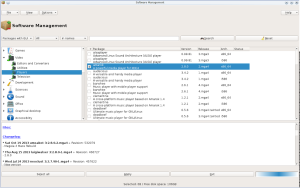 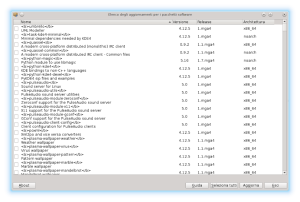 A lot of work was required to update qlipper because it’s now relying on libqxt and this library wasn’t already packaged for Mageia.

Gambas3 3.5.0 was released and then packaged a few days after the Mageia versions freeze. It ships now with a lot of bugfixes and some new components like gb-loggin, gb-net-pop3, gb-mime, gb-openssl and so on.

Areca-Backup 7.3.7 add some new feature and it fixes some delta blocks backup bugs.

Angelo was finally able to bring some improvement to the yui library (libyui) so I’ll hopefully be able to continue my work on rpmdragora. Stay tuned! 😉

The Oct 26th, 2013 I participated to the Linux Day event in Vigevano, a northern Italian town near Pavia and Milan. The event was organized by the Linux User Group DUCALE (LUGDucale) from Vigevano.

During the entire day I was standing near my Mageia powered personal computer (1GHz cpu, 1GB ram memory and stuff like that) with a lot of fliers, to show people the powers of the current stable version and to provide any kind of information about Mageia and the software it provides through its repositories.

I want to say thanks to the entire crew for their great efforts and their passion.

I reactivated the backports repository a couple of days ago and the first packages are now available:

This new versions brings some new features, mainly bugfixes. Other packages will follow but I’m currently working on testing each one of them very deeply. At the same time Victor is growing and it will provide better and useful informations. 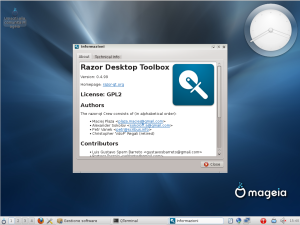 It was four months ago when the first source tarball was released. It started just as a game, a way to play around with a powerful toy: Gambas 3. Now yaflight it’s a nice piece of software 🙂  UPDATE: yaflight was totally rewritten using C++ and the Qt framework to make it multi-platform. The previous series is now known as fglc

I always thought – as many other people – that BASIC-like languages were underestimated due to their steep learning curve: yeah, many people think that if something it’s too easy then it’s somehow low quality 🙁
If you are part of this group of people, feel free to take a look here: as you will see along with simple applications there are a lot of great software applications about domotic, business processing, erp, warehouse management, networking, database mapping and modelling and so on.

I began using Gambas 2 for simple tasks – mainly home tasks – years ago, cause it recalled me the high school times spent using visual basic 6 and kylix (many thanks to Professor Salzano) and then my first job as software developer when I used to work with vb.net stuff.

Then the time of FlightGear comes: after my “battesimo dell’aria” (first flight) aboard a Eurocopter AS355 piloted by Simone De Tomi (Requiescat in pace) I started using FlightGear on my boxes powered by GNU/Linux. It was the time of the 1.9 version and I was using FGRun to launch the simulation: it was immediatly clear to me that FGRun wasn’t fitting my needs: I was a n00b at that times (the guided procedure helped me a lot, however that gui was to heavy for my box). There were alternatives to fgrun but each of them wasn’t the one I was looking for so I started learning how the fgfs executable was called by those interfaces and I learned the meanings of all of these parameters (thank to man fgfs).

Acquired the necessary know-how I began wondering if a custom solution would been a good idea and if development would been possibile in my spare free time: Gambas2 came to my mind immediately! Honestly Gambas3 came to my mind cause I was thinking to develop using a modern environment rather than using a product that would be discontinued after the official release of the new one.

A pencil, some paper and few lines of code convinced me that it was affordable so yaflight 0.1.0 was born (really many months passed after my decision and the first real implementation was delayed due to various personal events).

My choice fell on Gambas3 not only for a legacy of teenage: Gambas3 allow the beginner as much as the veteran, to develop his applications without headaches, beeing able to concentrate and focus on the aim of their program. Moreover Gambas3 IDE/RAD integrates a system to produce packages for many GNU/Linux distributions, easing the application deployment.

So, I started the yaflight development with some fixed reference in my mind:

These points are not yet fully respected but I’m working in this direction and gambas3 helps me providing a wide set of useful components ready to use to build a feature rich application.

YaFlight don’t tries to replace FGRun or other launchers that are surely more advanced and more refined, but it insistently tries to do things in a different way: a better way, maybe 😛

I’ll try to maintain and improve yaflight for the years to come as long as my job, my studies and my life will allow me to do it. Any contributions will be of help (translations, code and donations last but not least).

YaFlight, FlightGear and Gambas3 are Free Software… “give them all a chance!”

For the lazy people…